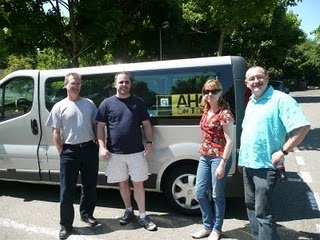 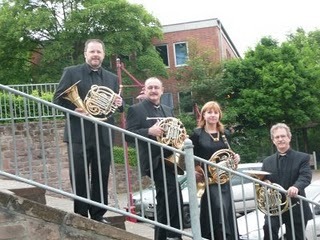 It has been months since I last offered a blog posting on this website – writing has always been a balance of activity and introspection for me.  The fact that nothing has appeared here since March probably shows an overdose of the former, and lack of the latter.  Now that a friend of mine, Bruce Richards (principal horn in the Liège Philharmonic Orchestra), has started blogging at my urging (check out his worthy musings here,) I feel inspired to take up (virtual) pen to (cyber) paper once again.

So many projects have come and gone since March, but for me, by far, the highlight was the American Horn Quartet’s European tour, where I filled in for David Johnson (recovering from a broken eardrum.)  We played 10 concerts and offered master classes and coaching in various locations in Germany, Luxembourg, France, and England.  It was on rather short notice that I received the entire 3rd horn book for the tour, many notes to learn, with a Luxembourg Philharmonic tour to northern Italy and Prague in the middle of it all.  Even though I have been a guest of the AHQ on several other occasions (mostly on Kerry’s popular The Casbah of Tetouan, but also a few other multiple horn performances here and there on various continents), it’s truly a different animal playing as part of this magnificent quartet, à 4.  We hastily put together a program for a gig for the German Criminal Defense Lawyer’s Association near Bonn, and shortly afterwards met again in Bonn for two days of intense rehearsal.  One of the secrets of the AHQ’s success is that very little, if anything, is left to chance in the performances.  Pieces and passages are rehearsed into the smallest detail, including metering crescendos and diminuendos exactly by beat, arrows indicating when to change the intonation of a held note according to the chord changes, ornaments and lengths of articulations, etc.  You wouldn’t believe how many fingerings I wrote in for the fast passages in the Turner Quartet #3, for instance.  Luckily, I was playing from copies of David’s music, and the fingerings he wrote in for stopped passages and tricky bits were absolutely brilliant.  I even bought a cheap (and yes, pretty nerdy) pair of reading glasses to aid me in the rehearsals.
The first official concert on the tour was at the Stumm’sche Reithalle in Neunkirchen, near Saarbrücken, Germany.  This photo, used for later publicity on the tour, was taken just outside the concert locale.  Even though I felt extremely prepared, the program was taxing to the limit of endurance, as well as one requiring constant concentration.  Playing at this level is like driving a race car, in that one moment of inattention can cause a crash.  I was also concerned with showing that their trust in me was warranted!  Then, as we walked together on stage to warm applause and began the first piece, “America-Tonight” from Walt Perkins’ arrangement of West Side Story, there was no time to think about anything other than the task at hand, the next bar, the turn of this phrase, the tuning of that chord, the mapping of energy to get to the high C at the end of the piece… and this continued throughout the concert.  On the one hand, the absolute devotion to the moment and the mental focus and clarity required to carry off such a task blot out everything but the performance itself; on the other hand, I felt throughout the tour that this state of mind was the most natural thing in the world.  There is room for bold musicality and gorgeous emotional phrasing, but always in a calculated and intelligent way.  The first concert went off without a hitch, as did the following nine.  Each evening we were faced with a different acoustic.  For instance, the chamber music hall in the Luxembourg Philharmonie was quite live with the sound bouncing off in an unexpected direction; in Saint-Nazaire, the acoustic was dry as a bone while we were all glistening with sweat in the heat; the cavernous American Cathedral on the Avenue Georges V in Paris caused us to alter our program to fit the church’s resonance; and so on.
We traveled from venue to venue in a rented Renault Trafic minibus, in which Kerry had posted homemade signs in the back window.  Nearly 5,000 km passed under the odometer as we drove from place to place.  Waiting for the ferry in Calais to take us to Dover for our weekend at the Tonbridge School, we pulled out our horns and practiced on the quay (to the amusement?? of the other ferry passengers.)
You can see a few videos on YouTube from performances on this tour, 2 with students from the class of Xiaoming Han at the Hochschule in Saarbrücken: Take 9 Fanfare and Farewell to Red Castle, as well as a video of our encore in Versailles, Bach’s Air on the G String.
It was an absolute, unadulterated joy for me to be a part of this project.  Geof, Charlie, Kerry, and Sherry (Geof’s significant other, who took care of the merchandise sales on the tour, as well as helping with the driving and providing me with some female companionship!) were ideal travel cohorts, and were in high spirits for the duration of the tour.  They made it very easy for me to “drop in” to this world-class ensemble, and I am grateful for that.  The problem with being on a 3-week high with this sort of gig is, well, coming back to the real world!  Though I also love orchestral playing, returning to the rank and file felt like being a steeplechase horse who had just been harnessed to a plow.  That plow pays the rent though, and the yoke is relatively light…

Your support is welcome! https://ko-fi.com/tawalanki