It’s a bit daunting for me to try and sum up our summer 2010 adventures, but I might as well plunge in and just start writing this blog!  After much preparation and rehearsal, we embarked in July on the performing part of our travels.  With husband Kerry and pianist/friend/soul sister Lauretta in tow, we made our first stop in the almost magical land of Singapore.  On each visit to Singapore, I’ve been struck by the way so many diverse cuisines, religions, and languages live practically on top of each other, harmoniously, like a crazy multicultural patchwork quilt.  The purpose of our brief stay there was to get over our jet lag on the way to Brisbane (more about that later) and to try out our Virtuoso Horn Duo recital program before presenting it at the International Horn Symposium.

Shortly after arriving at our comfortable hotel, we met up with our friend Jamie Hersch, who plays horn in the Singapore Symphony and is a fine soloist in his own right.  We went out for some local food (Kerry and I opting for Mee Rebus, a Malay jungle noodle dish we first ate 6 years ago at the Singapore Zoo.)  Afterwards, we went for a walk and ended up at the Raffles Hotel, sitting outdoors and enjoying a Singapore Sling from the cocktail’s birthplace.  The next couple of days were spent rehearsing at Top Brass, the hosts of our recital, as well as taking long walks through different parts of town – Little India, Arab Street, Chinatown, Boat Quay (oh, that Indian restaurant!!) , and other neighborhoods, great and small.   Kerry is very much in his element in the tropics – it was a delight to watch him blending in with the local scenery like an exotic bird among exotic birds.  It was also exciting for me to introduce Laurie to one of my favorite cities.  Our recital was a joy to play and the audience enthusiastic.  Afterwards, we were treated to a delicious Turkish dinner down the street from the Sultan Mosque, under a crescent moon, with old and new friends.

The next leg of our journey took us to Brisbane, a new city for me, on the occasion of the 42nd International Horn Society Symposium.  Both the American Horn Quartet (Geof and Charlie had come directly from Europe and were pretty jet-lagged for the first part of the week!) and Virtuoso Horn Duo were featured artists, so we had a busy week.  The weather was beautiful most of the time, despite it being “winter.”  They should see OUR winters!  Actually, it was warmer there than it is here today in early September… I was able to go running a few times along the river.  Symposium host Peter Luff and his collaborators (especially Armin Terzer, whom I bombarded with emails for months before the symposium!) ran an amazingly well organized week of concerts, master classes, workshops, and other events.  Through past workshops and the master classes and concerts we’ve played over the past few years, so many of the horn players at the symposium were already familiar faces.  Many of the world’s finest players and teachers were present, but of course it was a special sort of thrill to come down to the hotel bar and have breakfast with Barry Tuckwell!  As usual, the hotel bar was the scene for post-concert merriment every evening. Sometimes it got just a wee bit raucous down there 🙂

We played in the opening ceremony (a larger horn ensemble piece composed for the occasion and with the AHQ), the AHQ shared a recital with Frank Lloyd which included his collaboration on The Casbah of Tetouan, the VHD shared a recital with Bill Vermeulen and Nicole Cash (both of whom I met for the first time and whose exquisite playing I enjoyed,) the AHQ gave a master class and a warm-up session, we played the Schumann Konzertstück on the final concert with the wonderful Queensland Symphony orchestra, I taught several private lessons… Laurie was incredibly busy too, playing a heroic number of new notes on numerous recitals and differing pianos.  I’m not sure she knew what she was getting herself into when she agreed to come with us to Australia!  If you’re a horn player and have never gone to an international symposium, do make an effort to do so.  I promise you will come away inspired, energized, with new friends.

One funny moment – before the AHQ warm up session (at which I once again delivered my lip trill sermon) I was waiting outside the door for the key to show up and fell into conversation with a couple of ladies from upstate New York.  I think they took me for a student until I mentioned that I wished I’d had a little more coffee to be able to help present this session at such an early hour.  They did a double-take, then one of them exclaimed, “Wait a minute… You’re THE GIRL!”  She pointed to me for emphasis then enthused to her friend, “She’s THE GIRL!”

The last morning we were in Brisbane, we went to see the absolutely unique exhibit of the sculptures of Australian artist Ron Mueck.  Look him up.  Really.

We flew from Brisbane to Sydney, where we were the guests of Tina Brain.  If Tina could bottle up and sell little doses of her boundless energy and enthusiasm, she’d make a fortune!  To say she teaches at the Barker College, a private Anglican school in Hornsby, would be an unfair understatement – she is as much mentor and surrogate parent to her students as instructor.  We had the opportunity to work with some of her students as well as to play a VHD recital, all organized by her.  It was great fun to hang out with her for a couple of days, to hand-feed the exotic birds (including kookaburras, rainbow lorikeets, and yellow-crested cockatoos) who visit her balcony, to peruse the old photographs hanging on the walls of her downstairs study of her horn dynasty family – some of which were already familiar to me from Dennis Brain’s biography.  I only wish we didn’t live so far apart.  Anyone who says “it’s a small world!” obviously hasn’t flown to Australia recently.

Our last “on-duty” day was back in Sydney, where we gave a master class for Ben Jacks’ students at the “Con” (Sydney Conservatory.)  Ben himself came straight from having oral surgery and very bravely came to hear us for most of the afternoon anyway!   I first met Ben at the Melbourne International Festival of Brass in 2004, and it was great to see him again.

We flew that night back to Brisbane to catch our flight the next day back to Singapore.  I had looked for a cheap hotel near the airport, and we ended up at Brisbane’s equivalent of the Bates Motel, seriously creepy.  Kerry and I went for a late-night walk looking for a place to have breakfast the next morning – the hotel was located in a sort of industrial wasteland – but we did meet a man from Papua New Guinea, which was pretty cool.

The three of us, Kerry, Laurie, and I, ended our trip with three nights at a gorgeous resort hotel with a remarkable landscape pool on Sentosa Island, bordered on one side by the tropical beach and on the other by thick, tangled jungle.  I love the tropics, the sultry heat, the impossibly bright flowers and towering palm trees, the relaxed pace, the spices, the weird and wonderful wildlife – each time we have left Singapore behind, I have pined for it for weeks afterward.  Even the storm that lasted most of the second day was beautiful and vibrant.

Coming back to gentler, civilized, grayish Europe was its own sort of shock, but it’s home.  We were back for about 6 days before taking off on our “real” vacation to Andalusia.  Perhaps the subject of another blog… 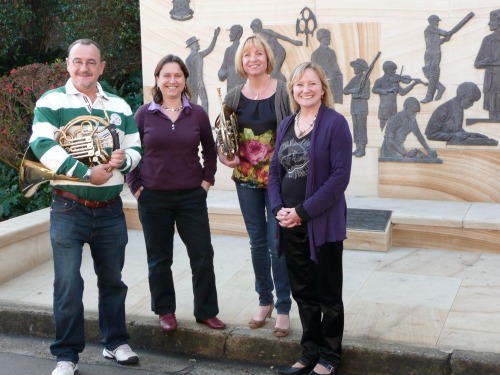 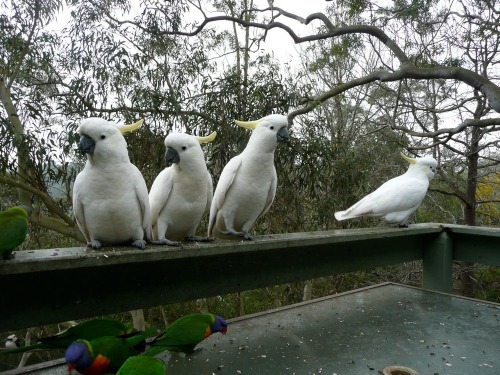 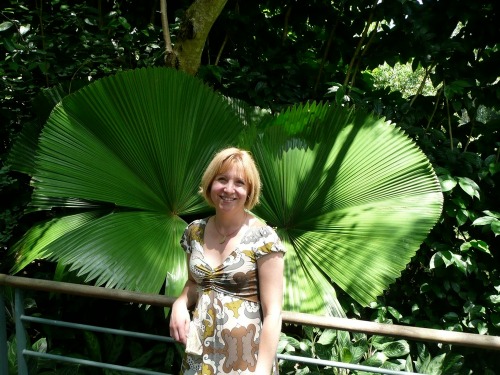 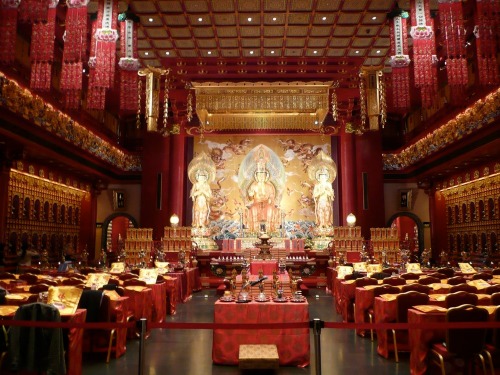 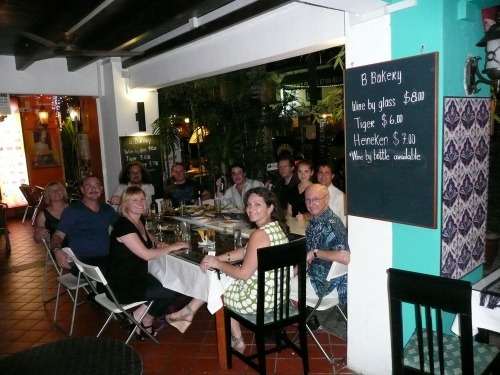 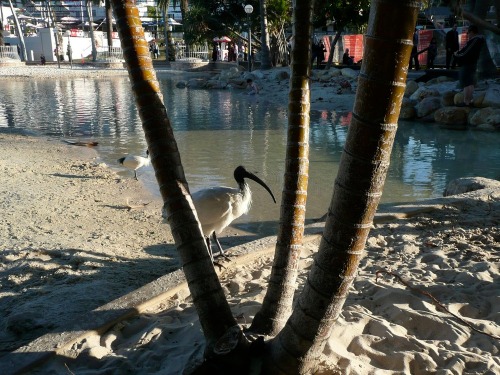 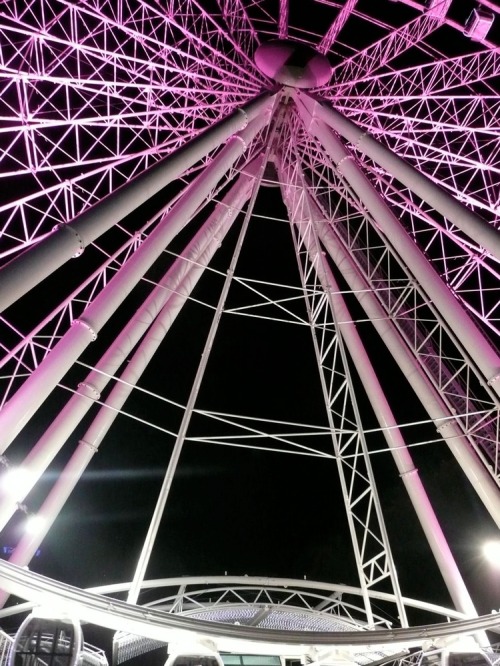 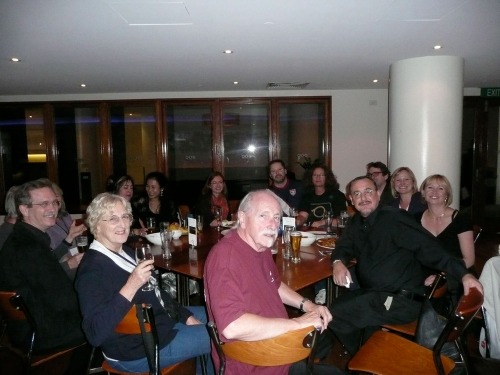 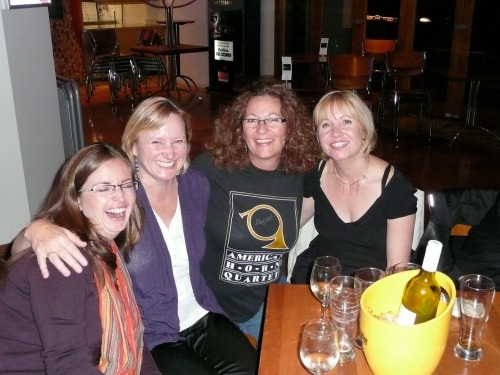 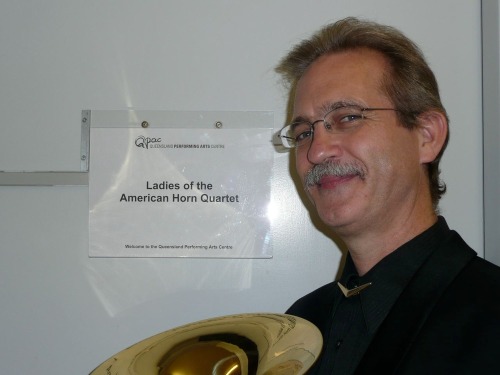 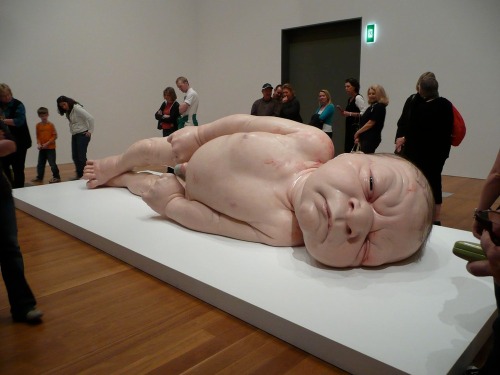 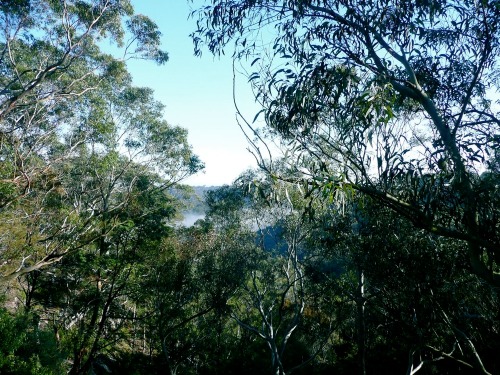 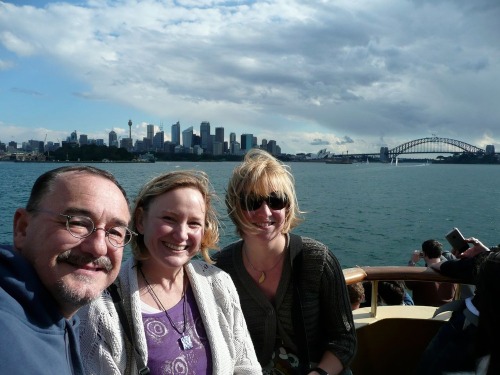 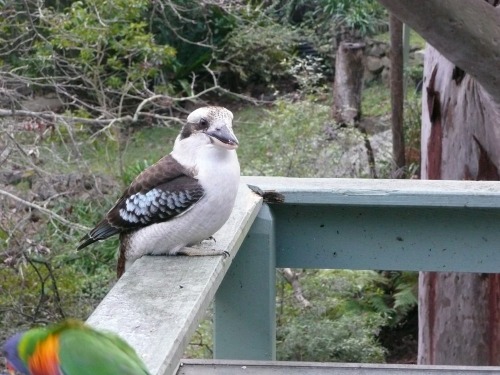 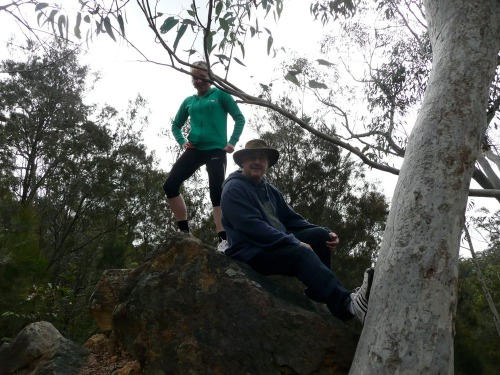 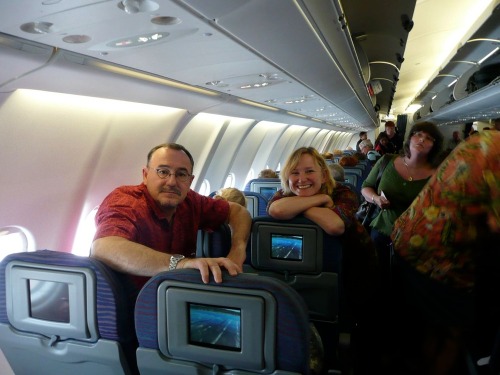 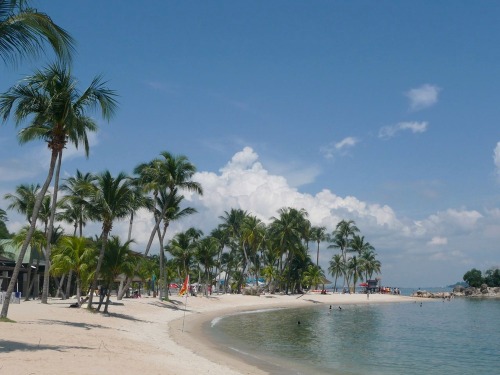 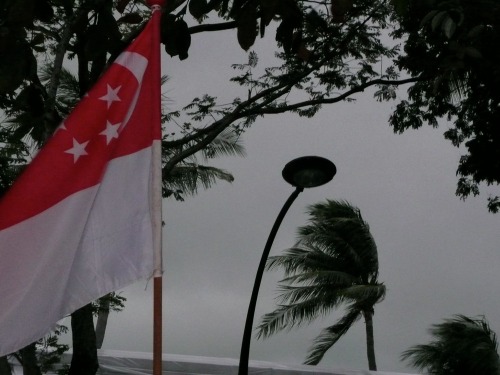 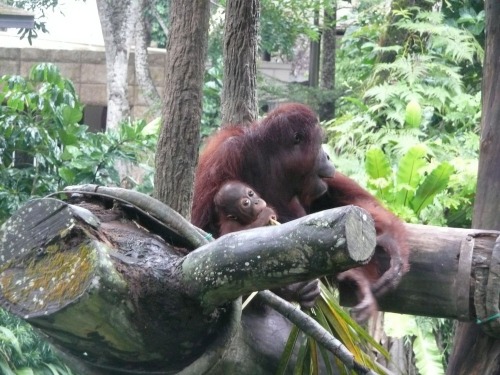 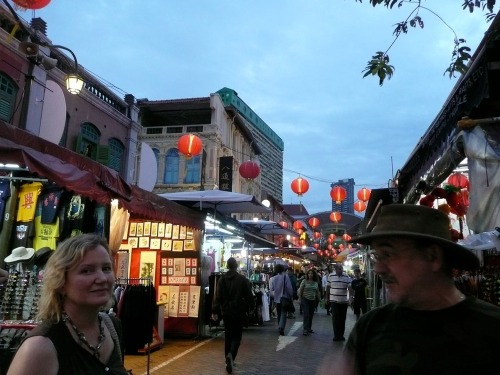 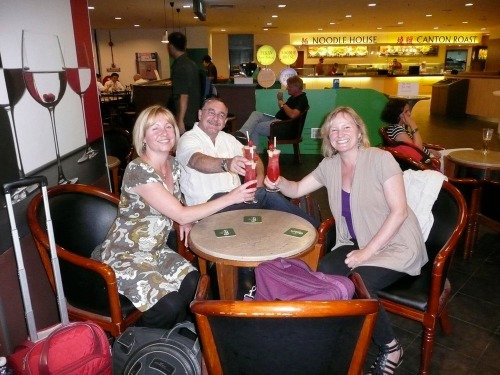 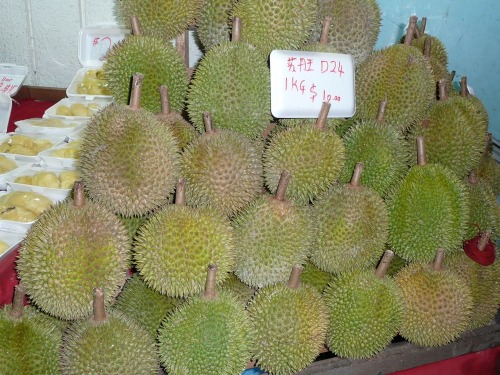 See the full gallery on Posterous

Your support is welcome! https://ko-fi.com/tawalanki